I’ve been in love with the Surface Pro since it first came out. I’ve owned every version that’s come out over the years, and it is like the device was made just for me: the perfect combination of power, light weight, battery life, and the ability to use it as a tablet.

Pre-pandemic I traveled a lot, and I’m nearly 2m tall (6’6”). So even if I get a first class upgrade on a flight there’s really not enough room to open a laptop and actually use it. And in coach it is entirely hopeless. So having a device that can act as a tablet is quite important.

When Microsoft announced the new Surface device lineup, they put me in a bind. Yes, there’s a very nice update to the Pro. But there’s also this new Surface Laptop Studio, which really caught my eye.

In practice, for me, they both cost about the same. By the time you get the high end Pro, the keyboard, and a pen, it adds up to about the same as a good Laptop Studio with a pen. So cost wasn’t a deciding factor.

The weight difference is substantial, with the Laptop Studio being much heavier than the Pro. Yet it has a larger screen for Visual Studio, and is a more powerful device overall.

I opted to give the Surface Laptop Studio a try, and mine arrived today. It is still to early to say whether I’ll be happy compared to the Pro - mostly relative to the weight difference. In terms of the screen, the power, use as a tablet on an airplane, and overall capabilities it is already clear that my choice is a good one.

Amazon really set the bar with their Kindle devices years ago, and consumer-friendly packaging has become the standard for Apple and Microsoft (at least) since then. 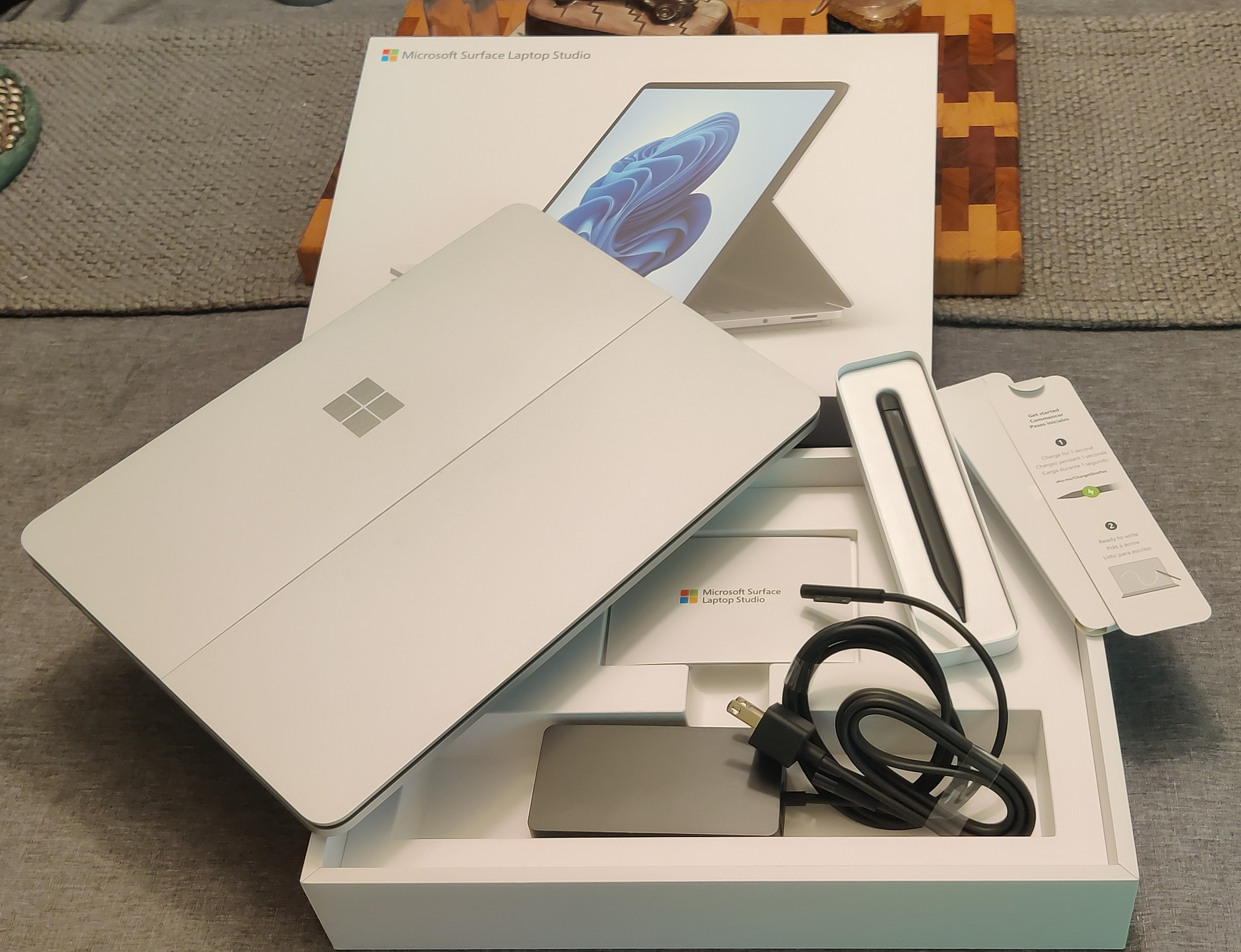 I’m pleased that the device uses the same power cord as previous Surface devices. The new brick seems heavier though, so I suspect it outputs more power than the bricks for the earlier Pro devices.

Upon opening the device it started its setup process. 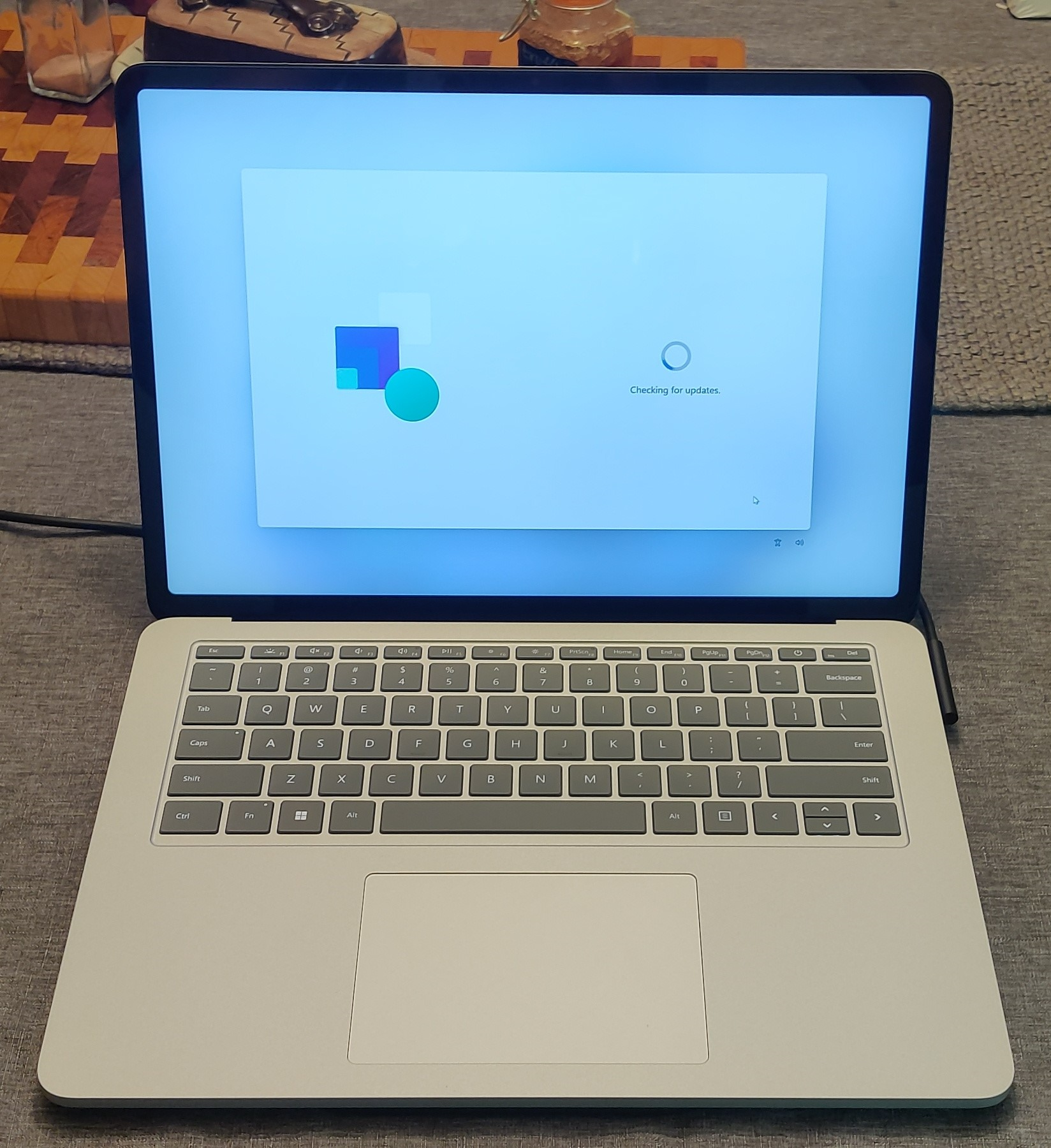 This took a long time. I should have timed it, but I think that from opening the laptop until setup, wifi connection, updates, and logging into my Microsoft account it was over 30 minutes. I understand the necessity of this, but it is frustrating to be unable to use the device at all while it sits and spins.

Once all the setup and updates finished, the desktop and new start menu appeared.

The screen is fantastic! Crisp, bright, responsive, and substantially larger than that of my Surface Pro. In terms of doing dev work while on the road, this is going to be much more pleasant.

In laptop configuration, the device is stable and has almost all its weight in the base. So the screen stays in place, and it feels good on my lap, without any sense of the device wanting to tip over backward.

Here’s another clear win compared to the Pro. Given my height, I’ve personally found the Pro to be adequate on my lap, but I fully understand how it doesn’t work well for anyone shorter than me. “Lapability” is a real thing, and the Laptop Studio is very “lapable”.

Switching to studio configuration is smooth, and magnets hold the base of the screen in place to the base. The result is a form factor I think will likely fit well into airplane seats for watching video.

This configuration is clearly designed for the pen. I’ve tried OneNote and Whiteboard with the pen in this configuration and it is pleasant. I think I’d want a little more tilt to the screen, but that’s a minor quibble so far. 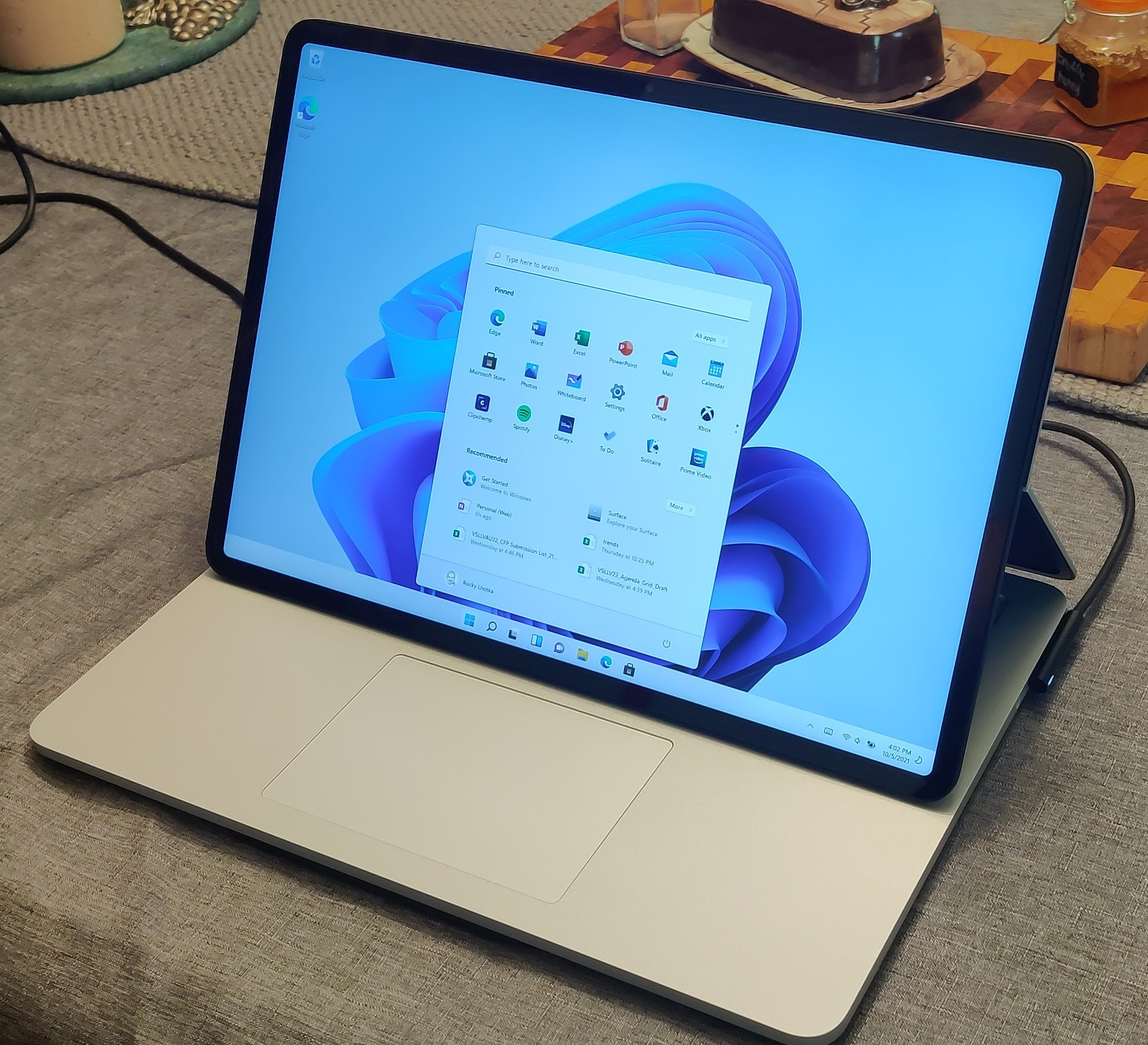 I did try to get more tilt to the screen - between the studio and tablet configurations. This didn’t really work well, because the screen isn’t nearly as stable without the magnets holding it to the base. 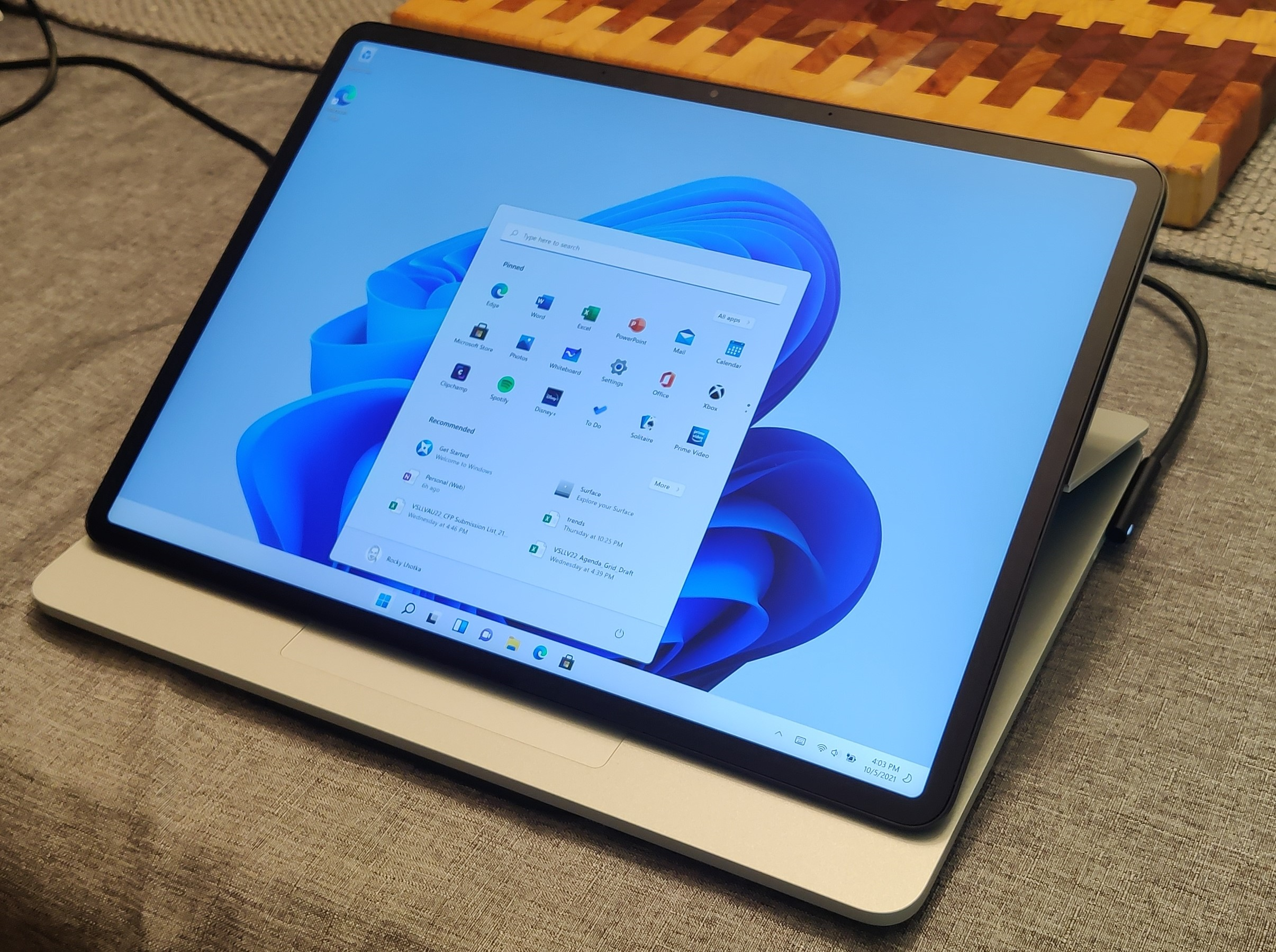 The tablet configuration is with the screen folded flat against the base. I’m a little skeptical of this mode, because the device is just too heavy to hold and use as a tablet. This is where the Pro wins, because it is light enough to use as a tablet for a period of time (though even the Pro is too heavy for lengthy use - either a Surface Go or an iPad is the answer for long-term tablet use).

I did try using the device in tablet configuration for a while. It really is too heavy, and too warm, so I doubt I’ll use it in this configuration very often. Time will tell.

The final thing I want to show is the pen setup screen. When I first pulled out the pen this automatically came up, providing a basic configuration wizard.

I was able to indicate whether I’m left or right handed, and there was a tutorial about using the pen, and how to configure the pen’s buttons.

And a pointer to configure the haptic feedback. I’ve seen at least one tweet where someone didn’t notice the haptic feedback at all when drawing with the pen. My experience is that it is subtle but noticeable. It really does feel similar to drawing or writing with a sharp pencil on paper. I get why Microsoft talked about the feature, as it is nice. Not a game changer though.

Subsequent times I’ve pulled the pen from its magnetic charge spot under the keyboard, a little toolbar pops up with a (customizable) pallet of pen-friendly apps I might want to launch. Windows 10 had something sort of like this in the system tray, but the Windows 11 approach is simpler.

I might discuss Windows 11 in another post. For now I’ll just say that they moved a bunch of cheese, and generally cleaned up a host of little annoyances from Windows 10. I haven’t spent much time with it yet, but I’m having no trouble adapting, and overall think it is a slightly nicer version of Windows 10.